Recently concluded India’s credible Fund Fest 2019 brought instant smiles on the faces of 13 founders and eight more are to have a sigh of relief shortly. Apart from this mega event had left many more participating StartUps hopeful with the vast investor community present evincing interests for future funding.

Speaking on the occasion the spokesperson of Natio Cultus Consultancy Pvt. Ltd, organizers of the event were full of joy and ecstasy at the positive response received for this flagship annual event. They described, “The finale of India Fund Fest was held on 10th May 2019 at the Ritz Carlton in Bengaluru.” In a direct encounter with Way2World (partners to the event), the organizers were bubbling with effervescence and were nostalgic about their success.

They expressed, “We are delighted to share that the finale had confirmed funding spot deals in excess of INR 25 Crores covering eight deals. With an additional three deals still open, the number is expected to touch INR 42 Crores.”

Adding, “On the confirmed deals alone, this is India’s’ largest Single Day Startup Funding Event ever! There were 28 finalists selected through thorough due diligence, out of the 14,000+ interested companies who pitched to 12 master investors. There were 13 offers made and 8 were accepted. Additionally, three are likely to close in a day or two. The event had an audience of 100+ partners and investors with one deal being struck by a member of the audience. The event was held in partnership with the web series, Horses Stable and the event was filmed live for later telecast as episodes of Horses Stable.” 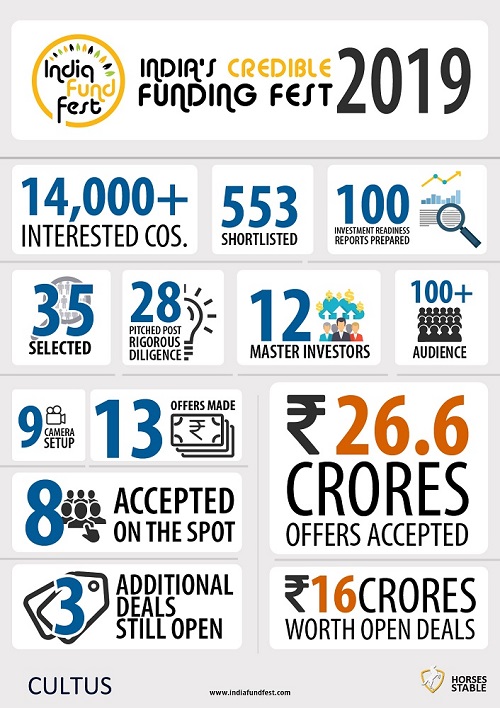 “INDIA FUND FEST 2019, in its third edition has partnered with HORSES STABLE and presented a distraction free atmosphere with the focus being only on the Entrepreneur & Investor and the mission of Accelerated Funding being prevalent since the beginning.

Without a mini carnival-like atmosphere where you are bombarded with crowds, speeches of sponsors and vendors trying to sell you their products and the whole purpose gets lost, India Fund Fest offerred a serious platform for funding.