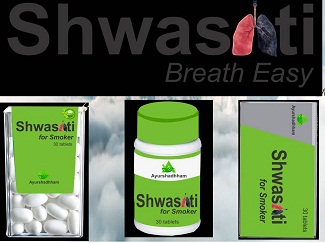 Are you suffering from passive smoking

Stuck in traffic for longer duration

Almost all of us are affectted from all the above issues. The growing number of vehicles on road adds to this mammoth problem,

Do you know among the top four metros in the country, Delhi tops the list in air pollution, followed by Kolkata, Mumbai and Chennai respectively. Nobody can escape this evil with urbanization spreading across the nation.

Is there a solution to this…..may be this aerospace engineer from West Bengal will solve the issue, Finally JOY DEB ADHIKARI finds a solution……

Is it possible to totally reduce the amounts of pollution…practically not possible…then what is the solution.

This young man from Alipurduar, North Bengal launches an AYURVEDIC formulation in the form of tiny gel capsules (globules). AYURSHADHHAM, the startup is launching SHWASITI, to the market, in a couple of months to enhance the power of the lungs in their combat against air pollution.

“All you have to do is to take one SHWASITI globules at night before you go to sleep. No need to boil water or mix your medication with any solution. Just ingest it like you would any pill. While you sleep, this tiny globule extracts all pollutants, including the black grimy tar, from your lungs and blood and discards it through your mouth along with phlegm or through your excreta. Now you can say bye-bye to bouts of cough or heavy breathing. Breathe easy with Shwasiti.”

Wiki states: Air pollution in India is a serious issue with the major sources being fuel wood and biomass burning, fuel adulteration, vehicle emission and traffic congestion. In autumn and winter months, large-scale crop residue burning in agriculture fields – a low cost alternative to mechanical tilling – is a major source of smoke, smog and particulate pollution. India has low per capita emissions of greenhouse gases but the country as a whole is the third largest after China and the United States. A 2013 study on non-smokers has found that Indians have 30% lower lung function compared to Europeans.

What made this aerospace engineer to move his focus on AYURVEDHA?: He feels that it is his family business and would like to pursue it as a passion. True none must forget our roots.

JOY further felt that entrepreneurship is worth its salt if it addresses the major issues of common man. In addition, he concluded that that the perfect functioning of the product would give him more satisfaction.

The family has a background of being active in AYURVEDHA formulations since the last half a century. Moreover, this product should help people suffering from respiratory disorders.

AYURSHADHHAM is focused on Asthma and have carried out successful treatment on more than tens of thousands of patients in North Bengal & the North East.

Being the youngest entrepreneur in this family, JOY DEB ADHIKARI wants to take the product to the next level with his entrepreneurial skills. Way2world wishes the young enterprising innovator, success in his endeavors. With inputs from internet and interaction – RajKishan