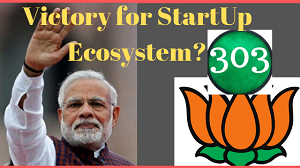 The election turmoil and speculations seem to have ended up at the Lotus HQ where BJP is positioned comfortably. BJP inscribes in the history as a party that has won a landslide victory silencing its opponents in style.

Probably this is the second in the Indian history, after our late PM, Smt Indira Gandhi. Well let’s not delve into politics much (as I am weak on the subject oops!)

The Ecosystem was moving at a snail pace inspite of investors burning their hands, before 2016. However it gained momentum post 2017 when the same government designed eco-friendly initiatives.

The industry started posting almost 50% increases on a year on year basis with almost investments, into upcoming StartUps pegged at USD 4.2 Bn in 2018 increasing from USD 2.0 Bn in 2017.

Scaling StartUps received huge funding posting almost 250% growth in funds being inducted into the ecosystem. This stage was set because of customised policies that instilled renewed confidence in investors and many first timers taking a plunge.

The best of the story was, 2018 witnessed eight new unicorns setting the stage on fire and encouraging new innovators tread the dreaded entrepreneurship domain. Stats show that almost five lakh jobs were created both direct and indirectly.

The ecosystem had tuned into a vibrant arena with innovators looking at disruptive and unheard solutions that solved problems which the society got accustomed to live on.

The impetus accelerated ahead at cruising speeds with lucrative collaborations from global partners like Estonia, Russia, Canada, Australia, Israel, Germany and South Korea.

With the Government laying ambitious programs like StartUp India and StandUp India, the momentum blew on full throttle. This resulted in 15K plus StartUps recognised by the initiative creating almost 150K jobs.

The imminent thrust on these areas even saw women entrepreneurs and techies joining the main stream designing the new forward economy for the nation of billions.

These growth policies had played a vital role in bringing back the power to the ruling part in the form of unanimous majority to the party that helped the ecosystem thrive.

It’s time for a return gift from the government to the ecosystem by designing amiable solutions for pertaining issues that hampered the growth of the ecology.

The ruling government must understand that it was the stakeholders mostly youth played a crucial role in this landslide victory conferred on the Lotus party.

With the architects of a blooming ecology sitting in Delhi, much rapid action is to be witnessed in the sector, as dreamt by the stalwarts of the StartUp ecosystem.

Lotus victory was trumpeted by the cheerful movement of the Sensex by reaching 40K mark on the results day. However instead of rejoicing on the laurels bestowed, the ruling party must get back to office and give more thrust to developmental issues.

Apart from issues like Angel Tax, Dual-Class Share structure, Ecommerce rules, Clarity on GST and FDI should be shown with magnanimous offerings.  On the whole, a pro StartUp emphasis must be shown by the Lotus party to win the 2024 elections too.

The torch bearers to the blooming economy must give chance for debating and discussions to remove the bottle necks.

Watch for more updates in these sections  while We join the stakeholders in wishing the new government a grand success.