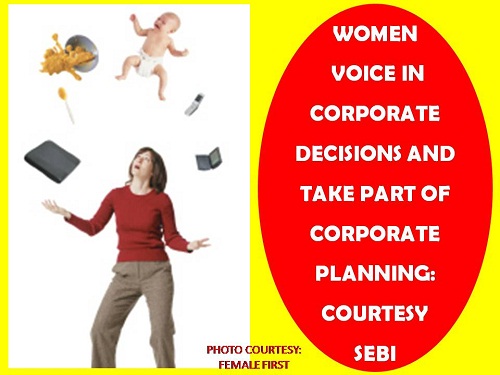 It is now mandatory from this fiscal year for corporate world to have at least one-woman director on board of directors, as declared by SEBI. Though there is a dearth of professionals available in the present dynamics, this step is sure to bring about a rapid change in women entrepreneurship levels, hope the elites.

Following European trends that pioneered in giving equal importance to women knowledge bank, Corporate India is now forced to implement the same locally. One awesome excuse that Corporate India might come up with is the lack of exposure of the women folks to dominate the corporate scenario.

Though this is an unavoidable excuse, it could be overcome with adequate training for the women who are near the required parameters. While education has given equal importance to the Eves and corporate world also accommodates many in their daily operations,  the only hitch is that, they have not risen to higher levels (except a few). Now is the time for the Corporate India to impart professional training to such deserving candidates and fill the mandatory requisites.

It may be noted that Norway, Italy, Spain, France, Belgium, Germany and UK, gave due credence to women entrepreneurs, since early years of this decade. Now they propose to increase the women stake in corporate boardrooms to 30% by 2016, giving the Eves a major stake in corporate planning.

Time immemorial women are known for their multitasking ability, however corporate India has failed to recognize this unique trait in them.

The recent statistics given by DC, states that among the 1,456 listed companies in NSE, only 490 companies have a woman director on board. However even there, most of them are namesake only. Nearly 65% of companies have kept the Eves away from the boardroom due to reasons best known to them.

The latest ruling to be implemented from April 1, this year will see the Women voice heard in boardrooms as per mandatory company rules. Being a part of Board of Directors women opinion would play a pivotal role in corporate India’s development and in turn encourage more of their tribe to excel in their respective fields. Hooray! A giant leap towards women entrepreneurship. grajkishan@gmail.com