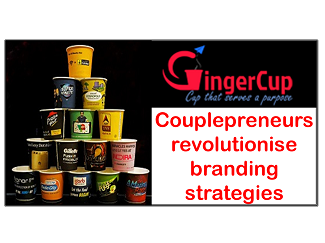 Branding is an essential tool to propagate the image of any company. Corporate spend huge amounts on strategies that are proven to yield results. They organise offline and online campaigns to attract customers. However to reach their target audiences and helping them take a call is the ultimate motive behind such endeavors.

Just imagine over a cup of hot gushing coffee, if your consumer gets a strong message of your immediate call-for-action strategy and takes a positive note of it, then the results are awesome. But how is this possible.

Couplepreneurs from Bengaluru have made this strategy yield miraculous results through simple paper cups embossed with your logo and a small tagline. And the result was a serious discussion over the brand while drinking the brew.

Boring coffee sessions turned out into vibrant branding forums. All this started when DEEPAK BANSAL and DEVLEENA NEOGI where planning to make their in house coffee sessions more interactive. Thus was born a StartUp, GINGERCUP in 2015.

The couple initially distributed few cups with a logo and message at some places and took stock of the outcome. The revelations were quite encouraging, nearly 80% consumers recalled the name of the advertiser and almost 50% even remembered the company code.

Their pursuit for market validation did not end there. They continued to serve cups to snack bars at various popular places across Bengaluru city and observed the way customers were engaged. The results were encouraging and the company began to implement.

The observation surely gives an insight of how important is market validation to upcoming StartUps. Because without a right reason no consumer will be ready to support your venture and it also helps in delivering a better product.

With initial validation being quite positive, GINGERCUP started its journey of supplying best quality (185 GSM) food grade paper printed with food grade ink to many snack bars located in IT offices and colleges. The cost of the paper cup advertising is almost equals to a pamphlet but the results are phenomenal. Hence the company has scaled to such an extent within three years of inception.

How was it possible to reach this stage? It is all because of their predetermined strategy. They try to understand the brand’s audience, supply the cups free of cost at the target locations where customer engagement would be good. Run the campaigns and evaluate the post analytics.

Probably, it is one of the best ways to acquire maximum customers at minimal costs. Because till date, GINGERCUP has distributed over 35 million branded paper cups across 23 Indian cities. 80+ companies have used cup branding as a medium for promotion, to create buzz about their brand, and to engage with potential customers.

Branded paper cups are distributed free of cost, but are chargeable to the brand being advertised. However, airlines and tech parks are paid to use these cups in their premises. From placing the branded paper cups at various points to handling logistics, distribution, photography, campaign analysis and reporting, they do it all.

GINGERCUP aims at stimulating discussions around the brand being advertised in such a way that no other media can offer. The exposure time with such a medium is 5-7 minutes unlike radio or television which is 15-45 seconds.

From advertising a mass brand to a class brand, paper cup advertising works effectively in grabbing the attention of 16 year olds to 60 year olds.

GINGERCUP assets have been creative marketing strategies that enhanced image of the participating brands. They differentiated as to how paper cup advertising works better for brand promotion and made them the talk of the town.

Way2World wishes GINGERCUP team a grand success and also informs readers that the company has huge plans for pan India. As per the narrative forwarded by Natasha Gupta…..With inputs from internet – RajKishan