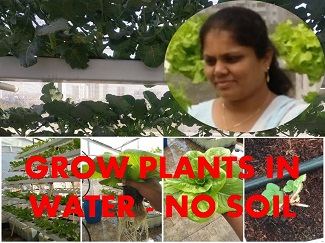 Planning to have a healthy salad

Worried about the water contamination in your foods

Depressed over the poor yield due to soil conditions

Are fertilizers eating your budget

Well the entire volley of questions can be addressed by HYDRILLA, a Bengaluru based startup that advocates for plants grown in pure water without soil that not only yields better produce but also very minimal fertilizers are consumed in this process.

The co-founder and CEO, MAMATHA KAMIREDDY of HYDRILLA in a candid chat with this correspondent updated that she designed a unique system through which many leafy greens and vegetables could be grown in water continuously running in a pipe.

The process involves food grade pvc pipes, which should be drilled at equal intervals in which the sprouts are inserted. The water is circulated in the pipes to give better oxygen to the plants. in this process very negligible amounts of fertilizers are added for a better yield. She ascertained that in some cases these plants have a shelf life of almost a week’s time if left in a bottle of water.

In her own words, the green house entrepreneur relates the traction of the venture, as follows:

“There is an increasing awareness regarding lack of food security among Indian Urban population and with that the desire to grow clean, nutritious-rich pesticide free food. However, lack of time and knowledge are the key issues faced by urban middle and upper class. Many people lead a compromised lifestyle owing to these reasons.

I could not put the necessary time and effort needed to grow vegetables on my terrace using healthy organic practices. They needed lot of attention, which I could not provide due to my busy lifestyle. That is when I heard about Hydroponics.

Though she came across Hydroponics years back, it just remained an idea since that was the time she had launched her startup BuildingeKart venturing into Architecture and construction services.

After few years, the idea of HYDROPONICs farming came back to her again and this time she decided to take it up. During further investigation, she and her partner VENKATA SUBBAREDDY came across AQUAPONICS. The idea of growing fish and plants together in a symbiotic environment hit home and there was no looking back.

By the end of 2017, together, they setup a farm on their 2000 sqft house terrace in Bangalore using both AQUAPONICS and HYDROPONICS methods. Their daughter AASHIKA named the farm HYDRILLA which is the name of a well-known aquatic plant. As they ventured into it, issues surfaced one by one.

There was a lack of proper resources, education and necessary materials to establish the systems here in India. Thanks to VENKAT’S years of expertise in construction industry, they could solve the difficulties w.r.to building the AQUAPONICS systems as per the design principles. Getting systems design correct is of utmost importance in AQUAPONICS as it involves growing fish, which are susceptible to minute errors in the environment.

Two months into execution MAMATHA realized that there was potential for achieving greater yields and reduced crop cycles in Hydroponics farming provided the grower gives right nutrients to the plants. Once again, MAMATHA saw huge gap in this area. Not getting satisfactory results with the

HYDROPONICS nutrients available in Indian market, she ventured into customizing and making HYDROPONICS nutrients on her own. As of today, MAMATHA makes Hydroponics nutrients customizing water soluble fertilizers to a variety of crops. She has grown leafy greens like lettuce, Spinach, Herbs like Oregano, Thai Basil, and a variety of vegetables like Cherry tomatoes, Broccoli, English cucumbers, Green/Sweet peppers and fruits like Strawberries successfully.

HYDRILLA also offers extended consultancy solution handholding the farmers who are venturing into Hydroponics for the first time guiding them right from farm setup until they achieve their first successful crop.”

While concluding her saga, the Hydroponics expert revealed that SALMA MOOSA OF STARTUPS CLUB had inspired her in many ways to take initiatives forward.

WAY2WORLD admires the efforts of MAMATHA and wishes her venture a grand success. She is a role model for any aspiring entrepreneur in the country. With inputs from internet – RajKishan 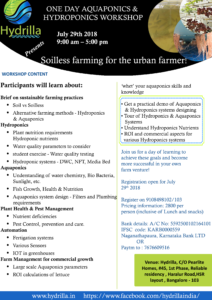